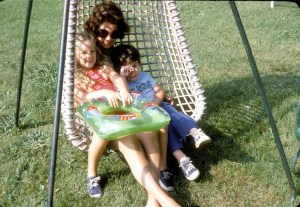 I’ve just returned from Chicago, where I was attending my Gram’s funeral this weekend. As I mentioned in my last post, her time was near and she died at home on Friday, March 12th. This was my final trip to her house of over 50 years in the Beverly Hills section of the South Side of Chicago. As I type, my mom and aunt are preparing the long and difficult job of putting together an estate sale and getting the house ready to put on the market.

It was a strange and emotional trip, with lots of tears and laughter. It was so great to see my cousins, aunts and uncles; some of whom I hadn’t seen in many many years. It was also wonderful to hear stories about my Gram from my aunts and spend a little time in her well loved home. Being there with my extended family brought fresh anger over the loss of the Michigan home. With Gram no longer our common denominator, how do we stay a family?
Speaking of Michigan, I found it poignant that Gram’s funeral was on St. Joseph’s day. St. Joe, Michigan is the place where I spent most of my time with Gram during the summers of my childhood. Joseph, her father, immigrated from Sicily to Chicago via Ellis Island. Joseph Jr, his son, took Michigan away from all of us.
I think perhaps I learned more about Gram and my grandfather, who died before I was born, in these few days than I had in my entire life. Isn’t that strange? In many ways, my grandmother was a very private person. Though willing to recount story after story about her family, she was more reticent to speak of herself. Going through stacks of photos, I would ask my aunts, “who is this person?” and inevitably a great story would accompany the answer. 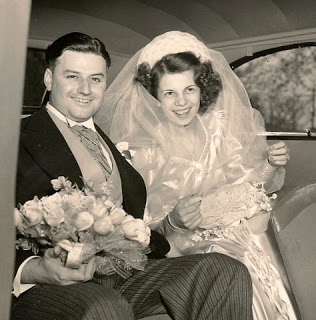 What really touched me was finding dozens and dozens of Hallmark Cards and letters sent between my grandparents. I never understood my grandfather to be an overly affectionate man, but I always knew he was devoted to his family. But these cards told a different side of the story. My grandparents truly adored one another. In these cards, some over 70 years old, you could feel the love they were so lucky to share.
As my own wedding is fast approaching, I can only hope and pray that Damir and I will be as blessed as they were. 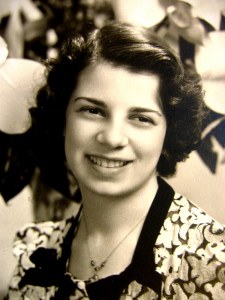 Mom says it’s just a matter of a day or two now. Maybe even just hours left before Gram passes on. Though her impending death breaks my heart, it is inevitable, as it will be for all of us.
A few years back, Gram told us that sweet angels had started to visit with her a night. Thankfully, she said that she found their presence comforting. And now, from the bed hospice set up in her living room of more than 50 years, she occasionally talks with the family members who already waiting for her at the next stop. Yesterday she started greeting all the people visiting her living room, “Oh, hi! Hi!” People who no longer walk among us are preparing to usher her through.
She fell out of bed a week or so ago which seems to have been the catalyst of a domino effect of deterioration. She was already quite frail, mostly blind and well into dementia. She could no longer retain memory or detail, except for occasional flashes of recollection which would
blow in and out like a rare summer breeze. She’s 92.
Though the physical damage of the fall was mostly repaired (broken hip, broken arm), it became clear a full recovery back to her pre-fall state of health wasn’t going to happen. She couldn’t understand the oxygen mask and the tubes in her arms, she pulled at them despite being told over and over they were vital to her recovery. She couldn’t remember.

But she still has the hearing of a cat. A sneeze across the room would elicit a “God bless you!”and a cell phone ring down the hall would prompt her to ask you to open the door, someone was ringing the bell.

Today my mother whispered into Gram’s ear, not even sure if she was listening, “You’re going to have so many wonderful adventures!” Mom was surprised to get any response, much less this… “I already am.”

Thank you, Gram. I love you.