A few months ago Damir and I got into a massive fight about garlic mayonnaise. It’s funny how something so innocuous can be the catalyst for such an explosion of emotions. 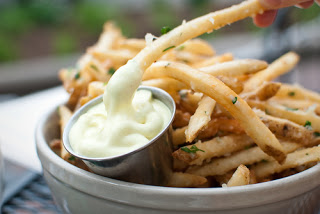 Months before this fight we were out to dinner somewhere and Damir asked for some garlic mayonnaise for his french fries; a European predilection he can’t leave behind, not that I blame him. Garlic mayo and french fries are a magical combination and for anyone who solely relies on ketchup as their dipping sauce of choice, I strongly urge you to try this out. Anyway, he asked for it and the waiter went into the kitchen and the chef made it special just for Damir. He was delighted.

Now he asks for it wherever he goes when getting fries with his meal. And this drives me crazy. The problem, my problem, is that often they won’t have it and the chef isn’t so nice as s/he was at the other place. And then Damir is sad. At least, that is my perception. I always cringe when he asks for it.

Returning to the night in question, Damir asked for the garlic mayo and the waiter didn’t have it. Damir had been cranky all night and looked dejected when the waiter wouldn’t even ask the chef. For some reason, this caused me to either roll my eyes or make a noise that was the equivalent of rolling my eyes. As much as Damir’s requests for special waiter favors drives me crazy, my reaction to his request drove him twice as nuts.

And then things spiraled quickly downhill. A very rocky unhappy slope. The argument didn’t last long, but it was definitely one of the few low points of our 5 year relationship.

I mentioned this altercation to my mom the other night while having a general discussion about the difficulties of marriage. She asked me, “Why do you care?” Good question. I never thought about it. Why? Why should I care if he gets his first choice of sauces? It doesn’t effect my personal enjoyment of the meal. The best I could come up with is that I hate that he asks for special favors and also hate to see him disappointed. I feel as though it’s MY fault they don’t have the garlic mayo, especially if I picked the restaurant. I feel responsible for his disappointment.

Which is totally stupid and irrational.

So after this conversation with my mom the other night, Damir and I talked about it. What’s funny about it is that he admitted to feeling equally uncomfortable when I do things like as for a room or seat upgrade when we travel, which I do whenever possible. Or when I send a dish back that isn’t to my liking. But he decides just to sit back and let me do my thing and not worry about it. I need to follow that lead. How is asking for a special sauce any different than asking for a special seat?

Mom was saying to me that one of the biggest challenges of marriage is understanding that the things that drive you crazy in your partner are a reflection in some way of your own issues. That you need to look at your gut reaction and examine it to see what is the true root cause of the negative response.

I don’t know entirely what the answer is here, but I am certain it’s not about condiments.

I think I had been married all of 5 minutes before I got the question: SO, when will you start trying for a child?


Ummm…hello? Let me eat my wedding cake first, please. The short answer to this question is: I have no earthly idea. Damir and I don’t exactly have the space to put a crib, I barely have room to unpack a suitcase…where would the baby sleep? Under the bed? In the fridge? In the bathtub? On a hammock suspended from the ceiling?

What is both very endearing but mostly maddening about Damir is that he doesn’t worry about these things. He just wants to be a dad. He figures the problems will just kind of work themselves out, that all you need to have a baby is one simple thing: love (cue the “awwwww”). Meanwhile, grumpy grump over here is mentally tallying up the cost of diapers, toys, baby-proofing the apartment, food, car seats, strollers, slings, highchairs, boppies, burp cloths, bibs, onesies, lovies, numbies, teddies, pumps, ointments, bottles, bandaids, baby shampoo, thousands of little pairs of socks, rattles, sleep machines, rocking chairs, sleep sacks, and about another million things babies seem to require. And that doesn’t even begin to cover what daycare will likely cost in New York City. AND what I would need to invest in industrial strenghth spanx. Listen, I don’t even know if I get maternity leave. How can I know when I will have a baby?

So, there you go. That’s the answer you’ll get if you ask me.

On the one hand, being home and newly married has been great. But in reality, not at all different. The biggest change since coming home is that Damir started summer semester which has him in class until about 10pm four nights a week. I miss my husband! 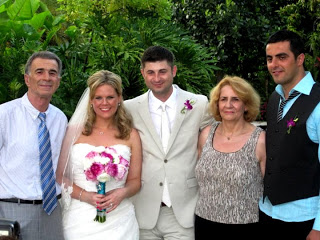 A lot of people are asking me if things will change with his folks now that we are married; if they’ll go back to Montenegro or get their own place to live. And all evidence, one-month in, points to no changes in the pipeline. At least not as a result of getting married. It would be great to come home to our little private nest and hold hands in wedded bliss, but that’s just not the deck of cards we were dealt. Certainly I knew that a long time ago and made peace with it before I walked down the aisle.
The other thing happening since I got home is a big feeling of restlessness– that’s not good. I need a new project now that the wedding planning is done. I have learned that when I don’t have an engaging project to occupy my thoughts, I turn inwards and pick at things that don’t need to be examined with such scrutiny. I know a few of you friends are like that too, so you can relate. The good news is I have a really great project in mind, but need to take the first steps to get it rolling. It’s something that is definitely out of my comfort zone, but totally new and exciting. No, not a baby, ha!
It’s too early to discuss ideas at this stage…I am afraid you’ll think poorly of me if it never gets off the ground. As things become more concrete, I will keep you updated.

The subject of marriage seems to keep popping up quite a lot lately. Sure, you already know I am eagerly anticipating my sister’s wedding this July, as well as the nuptials of good friend Penny in May. Two other close girlfriends have discreetly declared plans to wed sometime towards the end of this year or beginning of next. And lately I have booked a gaggle of honeymoons for couples wanting to celebrate in style at a variety of gorgeous Irish castles.

Then of course, it isn’t an uncommon question being posed to me these days, what are my own plans for marriage?

Damir and I talk about it quite often, both the wedding itself and the prospect of being actually married. We dream of an intimate wedding on a tropical beach in the Caribbean. But we are far from making any actual plans mostly due to circumstances and cash reserves. In some ways, this is a relief for me, as secretly (well, not anymore I suppose) I am a little terrified of being married. I mean, how does it work? Seriously folks, I want to know! What keeps people in it for the long haul?

When I come across couples that have been happily (well, mostly) married for years and years I always ask them their secret. Most of the time I get the standard answers like:

“Great communication is the key”
“It’s hard work, you have to keep at it no matter what”
“Keeping the romance alive is the only way to go”

Boring! I know all those avenues in a philosophical way, but not how they translate to the day in and day out…day after day…after day.

The granddaddy of all answers, however, came from a nice older couple from California I met last year at a convention in Prague. We ate dinner together and the strength of their bond was unmistakable. Over desert, I asked their secret of success. They first glanced at each other in a knowing way and then the wife turned to me and said:

“The key to our happy marriage is simple: his tongue and my money”.

Finally, an answer I can understand.